I look at the tips of my boots; they are always dirty. I think it happens because one foot always steps on the other.  It is a misstep that identifies my character.  I could never keep my shoes clean and well kept. Walking is a reason to explore. In my childhood I wore through a pair of shoes in a week. My father was always aware when the heel was worn, the tips’ leather scraped. If the shoes had bows, they disappeared the same day. “White shoes? Never,” my father said. I used to adore rubber-soled shoes, because I could jump without making much noise or run away from home to another adventure without being discovered, a detail that my mother realized very soon.  So they decided to buy girls shoes with bows and straps, with a slight heel, echoing through the house as if I was dancing “tap.” My parents made me wear a pair of white socks with my new shoes.  After 15 minutes they were already gray.  My mother spent hours bleaching them white. She had an orthodox infallible method: soap 123, hand-washing, and an entire night hanging them. The next day, an unparalleled whiteness, my socks were the whitest of all the girls, but, unfortunately, always ended with black hoops, like striped socks, white, black and gray, perfect shades of dirt.

I have always moved my feet side to side. To walk, I rolled my heels out and my shoes were squashed, broken socks with bloody scabs that fell and never healed.  My mother, angry, would scold – “Why do you always fall?” “I was just standing there and it happened,” I said – which was often true. Sometimes I stood watching some detail, and I fell. I got distracted, and I fell, or I ran and fell, jumped and fell, chased someone and fell.  I was excited and I fell.

No way to keep your knees safe — peroxide, cotton, and scolding, scabs becoming larger, always in the same place. The most fun was removing them and counting falls to have new ones. The pink round ghost on my knees was the prize for my achievements. The triumph of mountains of dust and sand, baseball on the stairs, strikes on the corners, hiding in closets, climbing the ladder, the barrels of cold oil at my father’s factory, where I plunged my hands in and out to have perfect black elbow-length gloves.

I admired how my father’s workers always had impeccable, well-shined shoes. The transformation from work to privacy, in the city as, defined by their black shined shoes, well guarded in a plastic bag. After work boots, they changed into white shirts and bleached socks like my mother’s, same process, one hundred percent proven. Every Mexican woman has that knowledge, that whiteness that glows on the dark-skinned people of Oaxaca and Toluca, which shaped my father’s business. They were like older brothers. Ever since I was very young, I enjoyed walking through the factory where the magic of steel happened. The industrial experience was in my life every day. In between private school, pianos and choirs, touring the factory and greeting people every afternoon was my favorite part of the day. Seeing their projects, watching five men heating a steel rod until it was red, the sweat, the control. It was hard to make a spring with industrial methods, hard on the hands of the workers.  They asked me about school, caring that my shoes did not get dirty.  They would say “girls never have dirty shoes.” For me, it was an honor being in the midst of so much character, with stories and humor, with weary eyes of 8-12 daily, which loosened laughter and companionship. I saw those men age, like my father, like his factory.

In my private schools you could not dream. New questions in class began to ring in my head.  My father was the kind of entrepreneur who was at first a worker. The parents of my peers were younger bankers, managers, professionals of modern offices, the immaculate black shoes with suits of Liverpool, which they never took off during the day. My father liked reaching into every project of his company, to be with the workers, as his children and siblings met on the road. As they grew the questions of other adults began to besiege me.  I was the daughter of the old industrial class, which didn’t pair with my age. I grew up watching workers and social leaders, which made me out of place when I used to go to friends’ houses, who spoke about travels to San Diego and Disneyland. In contrast, my brother and sister traveled to Germany and France. I liked being in that factory observing how matter changes state and becomes something else. Every week, I ran to the factory after buying my new shoes, and the workers of my father gave the nod to my shoes, they said that the key was in the details. Distinction was their philosophy.  They liked the derby’s and also they could distinguish between good and poor quality leather shoes.

Six p.m. was the happiest hour, the end of the workday. Time to turn the boiler to heat the showers with charcoal.  The most beautiful transformation, when black grease fades away with soap and you see the faces of those happy men who never complained. Time to get their shoes shined, leaving the gray shirts, time to go for bread and milk, girlfriends, wives or children, some waiting outside, dinner, and watching the news. All went out very beautiful and fragrant, with hairstyles, to the movies perhaps? The end of the workday was also for news of marriages, children, or loans for baptisms, or weddings. My father always took care and gave them what they asked for and my mother always got angry, saying that my father did not care for the family’s money, that he preferred to give the money to his workers, who used him. Ultimately, my mother did not understand what it was all about. The factory was more than a company, it was my father’s whole life, and no other individual could understand better than those men, of ultra-human forces who carried tons of steel on their backs, while my mother spent hours talking to artists and poets. That factory was my place of dreams and play, and where my shoes were always dirty.

19. It was three in the morning, one of the last days before the end. Jesus had not eaten for three days. He had lost the desire. Alone and with dry mouth, he brought back memories from his days in his factory with workers.  Memories attacked him – agonizing shrieks, crying. Ninety-five years old, he knew it was time, he remembered the years having come too soon. He would need another fifty years to finish his plans. “Moisés where are you? Moisés, Moisés.” He repeated and repeated that name. With the last of his effort, he dragged himself to where his machines were. He needed to keep his hands moving, keep active to not lose memory. He couldn’t lift a piece of metal, but he kept trying and calling to Moisés. He remembered the days of head and hands, the process of heating the steel rods in the oven until they blushed to the color of fire, coiling them with his workmates at the lathe to produce a spring, that when it cooled down, returned to the color of steel, breaking into pieces if the process failed. He always missed some pieces in the production. It was part of the process. One of several processes he had implemented. It lasted a total of three hours. When he finished, traces of coal and oil lined his hands, arms, neck, a cracked face preserved the black color – traces without a defined path, the most beautiful maps that someone can create with a life that pushes the body to its boundaries without fear. Gritty hands moved surpassing the pain of silence and with this idea, Jesus tried to lift that heavy machine. He couldn´t. He cried and kept calling Moisés, who as a little boy had run to watch his dad to learn how to build a new machine, to learn how matter changes state and becomes something else. If Moisés did not pay attention, he received a good reprimand. Jesus was reliving scenes in his mind, the impatience brought his hands to his head, pulling his hair and crying because his body would not respond anymore. “Moisés, come over…I am calling you”. Paroxysmal words. This is not the end.

Moisés arrived at the hospital. Jesús did not recognize anybody, but the voice of the oldest son of his last family was what he was waiting for, this concern was his last strength. Of all his sons and daughters, Moisés was the most vulnerable. He had been sick. Twenty years passed and he hadn’t recovered. A father always knows who is abandoned with his departure and who, out of all his children, will need him. They were the two strong men who taught a vulnerable beauty through few words. It was a farewell of jelly and soup, a farewell for the years ahead in his absence. Five years more and he would have lived a century, the boy born in the Mexican Revolution of 1910.  He watched decades pass of a colorful, painful, and resistant Mexico. My dad died in the night in 2005. He died old and my sisters said he was laughing. I am the daughter of that boy of the revolutionary era, who taught me to walk far from home with slow and confident steps, to treasure the details and recognize myself in them.

Pearl from the blue 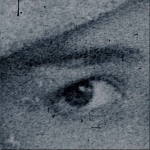